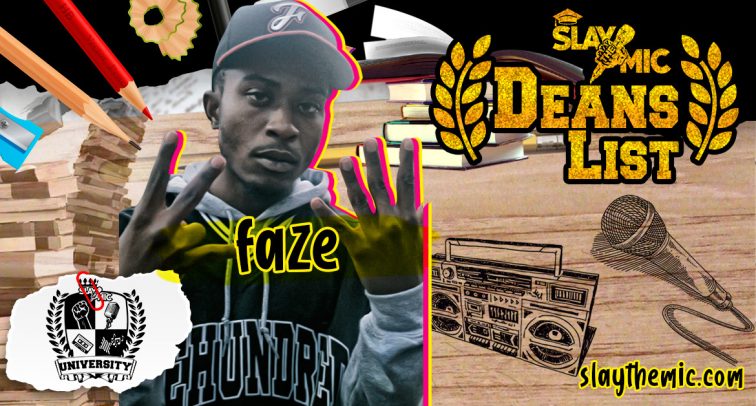 Faze is an artist from Fayetteville,NC born on August 23, 1997. From the age of 5-7 his family lived in a neighborhood close to Fort Polk, LA. Faze’s father is military so they moved around a lot before finally making it back to Fayetteville,NC.Faze first started making music around the age of 12. Faze got into music through his father, throughout the house he would play Little Brother, Kanye West , Lil Wayne and Biggie.

Faze ended up moving back to Fayetteville once Hurricane Katrina hit Louisiana in August 23, 2005 which also happened to be his birthday. Once Faze moved back to Fayetteville, NC he attended Lake Rim Elementary then in middle school ,he went to Reid Ross Classical School where he discovered his love for music where he played the drums for the school band and after practice, he would freestyle with friends as fun. As Faze got into High School he attended Seventy-First High where he would freestyle raps at lunchtime with friends or even on bus rides home. After graduating in 2015 he decided to take music seriously working everyday he could to get better and be in the position he is today.

Faze has been making music for about 5 years and ever since has grown, Faze says ” I still remember when I first started all of this , staying up every night trying to perfect my craft you know , doing open mics and little events just to get me started it was all worth it! ” Faze Released his first mixtape Titled “Its All A Faze” in 2016 which he quickly gained looks from. The project featured Villeboy Rand and Daze. 2017 Faze signed with William Prize to AZUS Records which he later ended up releasing a single through the label titled “Ball Game” featuring Fat Mack. This single buzzed the whole Fayetteville underground sound for 2 years.

Faze Is an Artist/Graphic Designer/Creative Director and Fashion Designer that attends NCCU. He designs a lot of the AZUS creations for the page he even made the logo along with helping promotion.