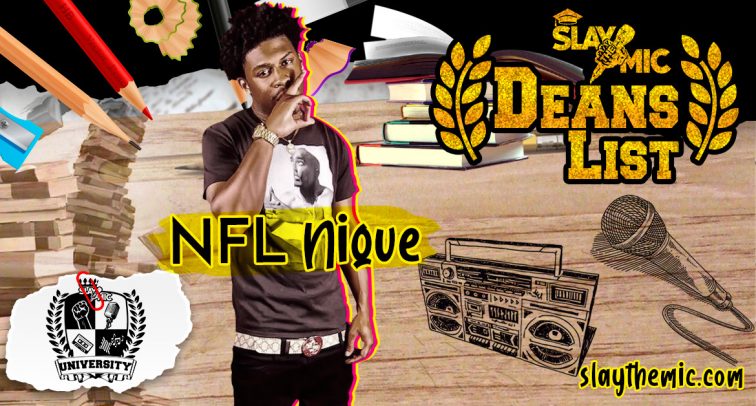 After being released from prison in 2017, NIQUE realized he had to evaluate his life and alter his lifestyle. Instead of reverting back to the streets, NIQUE turned to music to assist him in maintaining a positive lifestyle and rebuilding his image. By immersing himself into the music industry, he strived to become one of the hottest rappers to make it out of his hometown, Charlotte, North Carolina. Two years later, after spending endless nights in the studio and continuously pushing his music, he achieved his accomplishments.

His moniker, N.F.L. NIQUE, represents what he stands for, “No Fake Love”. NIQUE is surrounded by a team, who he considers family, who keeps him focused on his goals and away from the fake love, that has ended many artist’s careers before they even started. NIQUE spends his time wisely by being in the studio creating new music, studying the evolution of the music industry and educating himself on how to maneuver throughout the industry.

Inspired by his favorite artists, TuPac, The Notorious B.I.G., Kevin Gates, NBA Young Boy and Roddy Rich, he explains, “I learned from the greats how to use my music to express myself and get things off my chest. So every bar I spit is real because it comes from all of the joy and pain I’ve experienced in my life.”

His formula for success is a perfect combination of his raw passion for music and his versatile style of rapping. “My style is very unique and outside of the box. The way the music makes me feel puts me in my creative zone.”

NIQUE’s heavy buzz in the streets had fans eagerly awaiting his new album, “Drip God”, which significantly highlights his creativity and passion for music. By spending endless nights in the studio and pushing his single, Drip God, NIQUE finally mastered the album and released it a day before Thanksgiving.

This album is composed of 11 tracks, which all provide a distinctive flow and allows his listeners to relate to every lyric.